for signing this letter to our fellow Jews on equality and liberal values.

A list of signatories is displayed below the letter.

The American Jewish community is facing a challenge to the liberal principles that have long defined Jewish civic life and America’s democratic tradition.

Among our country’s blessings is an unparalleled protection of freedom of expression. This freedom is among the essential tools by which American minorities––including Jews––have made progress in advancing the causes of equality and justice.

Today this freedom is being threatened. An ideology is taking hold across the country that insists there is only one way to look at the problems we face, and those who disagree must be silenced.

This suppression of dissent violates the core Jewish value of open discourse. Jewish tradition cherishes debate, respects disagreement, and values questions as well as answers. In ancient times, the Beit Midrash––the House of Study––encouraged
passionate argument “for the sake of heaven.”

Jewish tradition has also long insisted that we only judge and be judged by our own deeds. “A son shall not bear the iniquity of the father, and a father shall not bear the iniquity of the son; the righteousness of the righteous shall be upon himself,
and the wickedness of the wicked shall be upon himself” (Ezekiel 18:20). The dominant social justice ideology, however, holds that individuals bear collective moral guilt or innocence based on the current conception of group identity.

Because this dominant narrative creates a worldview in which groups are only oppressors or oppressed, it encourages pernicious notions of “Jewish privilege,” even implicating Jews in “white supremacy.” This presents many Jews with an impossible set of political choices.

On issues of racial justice, powerful groups in the Jewish world have foreclosed the usual deliberative process. Rarely do Jewish organizations encourage discussions that include differing perspectives, even from within the Black community. In some cases,
Jewish leaders have even denounced Jews for expressing unpopular opinions.

America was born with what Rev. Dr. Martin Luther King Jr. termed a “birth defect,” continuing the institution of slavery decades after the nation’s founding. Through Reconstruction and Jim Crow, America continually failed to live up to its ideals, engaging in
rampant discrimination and the disenfranchisement of Black Americans. Despite substantial progress since the civil rights movement of the 1960s, much remains to be done to right the profound injustices of America’s legacy of racism.

We members of the Jewish community add our voices to the growing chorus supporting our liberal principles, opposing the imposition of ideology, encouraging open discussions of challenging topics, and committing to achieving a more just America.

In order for us to be successful in this mission, we need both human and financial resources. We need to be able to remunerate talented people to produce cutting-edge videos and materials and organize a wide range of activities and constituencies. Your donation will directly pay for this work. Please consider making a gift through the website. And please recommend others who might be interested in learning more about our work and supporting JILV in the days ahead. Learn more at our Case For Giving page.

THANKS – BUT YOUR NOT DONE YET

Thank you for becoming a signatory.  Please CHECK YOUR EMAIL.  For your security your name will not be on the letter until you click the confirming link in your email.  The email will be from Jewish Institute for Liberal Values <info@jilv.org>.  It may end up in your spam box.  Please go check for it so we can count you as a signatory.

Also, please consider sharing your experience with others.  Click any of the three sample tweets below to help us with our word-of-mouth social media campaign. 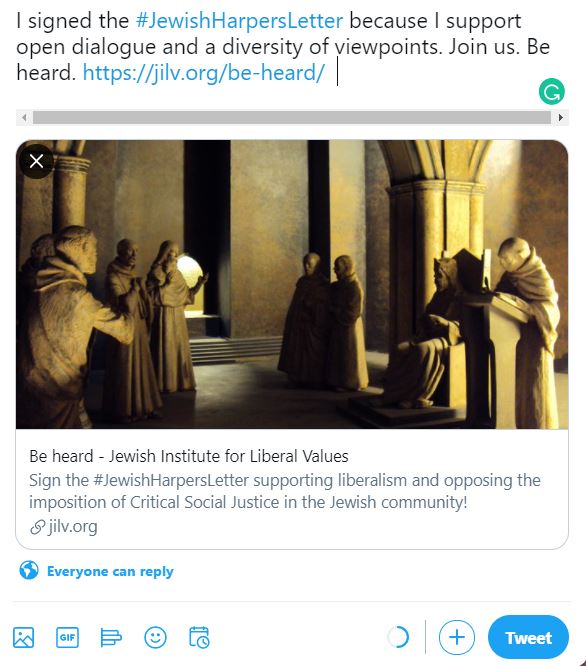 I signed the #JewishHarpersLetter because I support open dialogue and a diversity of viewpoints. Join us. Be heard. https://jilv.org/be-heard/

I am proud to have signed the #JewishHarpersLetter supporting discourse, liberalism & social justice, and opposing the imposition of Critical Social Justice. Please join me and @JILVorg in signing the letter https://jilv.org/be-heard/ 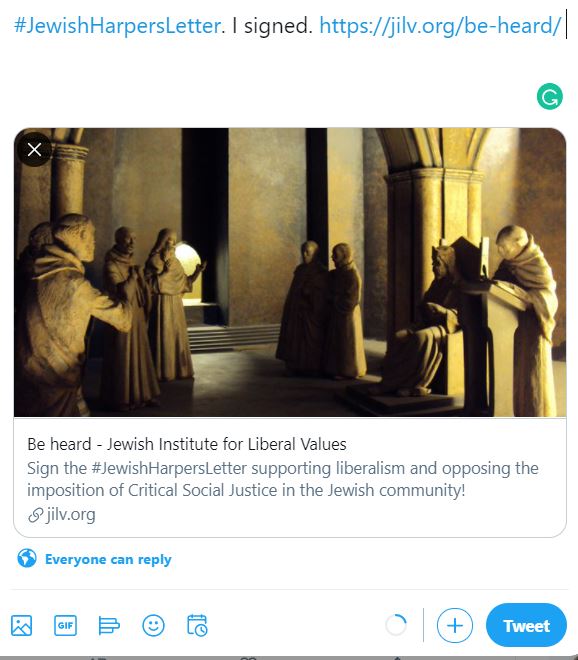